"You get the message about the resupply shipment?"

Alluded to in Lucas Santino's coded messages under the codename "Stork", weapon shipments are not so much quests but events that happen on Metavira unbeknownst to the player in Jagged Alliance. On specific days, certain sectors, if they are still under enemy control, will receive weapon shipments in the form of eight to ten extra crates containing guns, ammunition and explosives. Should you manage to retrieve the coded messages and decode the time and place where these shipments are scheduled, you will have the opportunity to intercept and steal these shipments.

In addition to the immediate gain in firepower your mercenaries receive by looting the crates, with every shipment you intercept, your native guards will become stronger and more effective at guarding the sectors you've captured. The opposite is also true, Lucas' men will get stronger with every shipment you fail to cancel or intercept. If a shipment is canceled (because you were already in control of the sector in question on the day the shipment was scheduled) neither the natives nor Lucas' men will benefit from it.

There are four shipments in total.

"Lucas and his resupply code. Can't he just use damned English?" 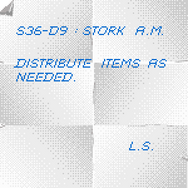 This one is fairly simple, "S36-D9" stands for Sector 36, Day 9 and "STORK A.M." indicates a weapon shipment in the morning. Should you raid this sector on that day, you will find nine crates near the shores in the top right corner containing: 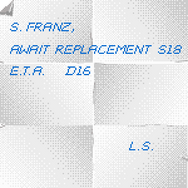 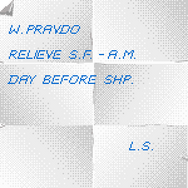 Pieced together, the informations of these two notes reveals us that W. Pravdo will replace S. Franz in Sector 18 on Day 16, and a shipment will be sent there the next day. If you attack Sector 18 on Day 17, you will be able to find ten crates on the eastern side of the landmass containing: 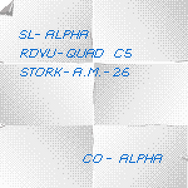 Here, Commanding Officer Alpha informs Squad Leader Alpha of a weapon shipment happening on Day 26 in Quadrant C5, or Column C Row 5 on the map, meaning Sector 43. If you raid Sector 43 on Day 26, you will be able to find ten crates on the southern side of the swamp, containing: 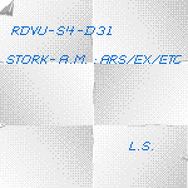 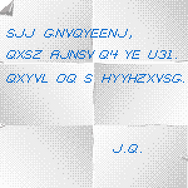 Another easy one: Sector 4, Day 31, but after a bit of sleuthing, decrypting this second message reveals you the shipment is a trap (after decyphing with help of other paper you will get "ALL PERSONNEL STAY CLEAR S4 ON D31 STORK IS A BOOBYTRAP. L.S."). Should you insist on intercepting it, you will find at the tip of the peninsula eight crates containing:

With the exception of three grenades, disarming the boobytraps will render the grenades and tear gases useless. Capturing this shipment will have no effect on the strength of your native guards. Lucas' men have also been informed to leave this shipment alone, meaning the crates will stay closed even after Day 31 and the enemy will not receive more firepower if you ignore it.

Due to their hidden and timed nature, shipments are extremely easy to miss for both beginner and veteran players. Although these shipments could be of use for a beginner whose conquering pace fits with the shipments schedule, the secretive nature of the coded messages makes it easy to dismiss as mere flavor text. And most veterans simply conquer sectors much faster than the shipments schedule can keep up.

Avoiding Sector 36 and Sector 18 until the shipments arrive may be extremely costly to your operation as these sectors are obstacles on your way to stabilizing your financial situation and the handful of quests the game throws at you. However, you value the shipments and hold out till those days. One could argue that the third shipment on Sector 43 is worth waiting for due to its high value, unless you're trying to finish the game as quickly as possible.

By the time you've conquered everything east of Sector 43, the game becomes pretty straightforward. Sector 43 is neither an obstacle nor offers any tactical advantage over its neighboring sectors, as such ignoring it will not impede on your progress, and you should be able to pay for extra guards around it as your financial problems will likely be solved, if they aren't already. As you approach Sector 1 and get a better idea on which day you will assault Lucas Santino's HQ, you will be able to judge more clearly whether you can be bothered to wait for the shipment or not.

A word of warning: Should you decide to wait for Sector 43's shipment, do not let Sectors 32 & 33 falls into enemy hands, as this would cut the link between the fourth processing plant and Sector 60, meaning no orders could be given to guards and tappers and no mercenary could be send to the west of Sector 33 until it is recaptured. In addition, the capture of Sectors 32 and 33 by the enemy would also interrupt the repair and sap processing of the fourth plant in Sector 31 if it exploded.

Retrieved from "https://jaggedalliance.fandom.com/wiki/Weapon_Shipments?oldid=16203"
Community content is available under CC-BY-SA unless otherwise noted.