This is an article on the vehicles featured in Jagged Alliance 2.

Vehicles are useful because it allows you to arrive faster to your destination while also allowing for your mercs to travel long distances without getting fatigued. The player can acquire three different vehicles in the game - they are the Ice-cream truck, Hummer, and the Helicopter. All vehicles have a capacity of 6 persons or a full squad. There is also the Tank which can be found in the hands of Deidranna's Army.

Note that if you enter a hostile sector while riding the Ice-cream truck or Hummer, your mercs will be dismounted. If you try to leave a sector, your vehicle will be left behind. In later patches, you can store items inside the vehicles as well (except the helicopter), which can make them useful for loading up battlefield salvage.

Certain vehicles requires Gas to be driven, these vehicles can hold up to two gas cans worth of Gas before needing to be refueled.

Aside from the various single cans found scattered in the countryside, a good location to obtain gas is Estoni - once you have liberated Tixa, rescue the man named Shank (Jake Cameron will mention his name if you talk to him) and take him to Estoni. Have him talk to Jake and he'll convince him to sell you gas - from then on, there will always be at least four gas cans available in the junk shop inventory for purchase.

Additionally, the player can occasionally get free fuel-ups once they have purchased the Hummer from Dave Gerard.

Vehicles that become too severely damaged (0 health) cannot be driven or repaired anymore, rendering them useless.

The ice-cream truck, and its driver Hamous, can be found in a road between Drassen, Cambria or San Mona. You must hire Hamous first to acquire the ice-cream truck, though he won't demand it back if he is dismissed. The spawn location for this vehicle varies, but there is a fixed list of sectors where you can try to find it. The sectors being D3, D7, D9, D11, F12 and G6.

You will need Gas to drive the vehicle and it takes half an hour to cross each sector. It can only be driven on the road (shown as dirt paths on the Map Screen). This vehicle requires a merc/driver to be awake while it is moving, though it would allow for other passengers to sleep during the journey. 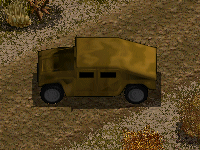 The Hummer can be found in L10, west of Balime. You must pay Dave $10,000 and pick up the vehicle on the next day to acquire it.

Similarly to the Ice-cream truck, you will need Gas for this vehicle as well and it takes half an hour to cross each sector. Oddly enough, although the game states that this vehicle can only travel on roads, in reality it can also be driven off-road and can traverse almost all of the land sectors in Arulco with only a few exceptions. This vehicle also requires a merc/driver to be awake for the journey.

The purchase from Dave will also grant an additional fuel supply, that is, Dave will fuel the Hummer free of charge, should it arrive at his location every now and then. This supply, however, isn't stable and Dave will sometimes have no fuel available. Some versions of the game also contain a small glitch - when both cars (i.e. the Hummer and the ice-cream truck) are at your disposal, Dave will fuel the ice-cream truck instead of the Hummer (despite the fact that the truck may actually be anywhere in Arulco at the moment). 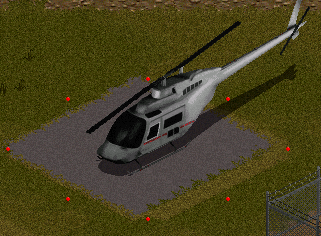 The helicopter can be found in B13, Drassen Airport. It can be acquired early on in the game, however there are certain things to take care of before you can travel by air. You must conquer the airport first, then complete a quest regarding the pilot of the helicopter and hire him. After that, you must take out the few SAM sites spread across Arulco, each covering a specific area/airspace of the map.

The helicopter differs from regular vehicles in that it doesn't use Gas or require a merc driving in order to fly, instead, it uses jet fuel provided by its pilot, Skyrider. It has a very high speed and takes only 10 minutes to cross each sector. It can also travel across the entire map, with the only exceptions being inaccessible sectors. The helicopter can also be used as a scout and will report any enemy presence in the sectors it flies over. Skyrider will not drop the player's mercs inside an enemy sector, however in the v1.13 mod, this option is allowed and gives the player the chance to strategically drop their mercs behind enemy lines.

There are a few drawbacks, however, to using the helicopter. They are:

The tank can only be found in and around Meduna, under the control of Deidranna's Army. Equipped with a powerful cannon and a coaxial machine gun alongside its strong bulletproof armor, it can prove to be a tough challenge to face. The use of explosives is needed if the player wants to take one down. After conquering sectors that once had enemy tank placements, the Militia that arrive on site will sometimes have their own tanks to defend the sector.

There is no legitimate way for the player to get a tank, however, in certain versions of the game it can be acquired through the use of a glitch. To obtain a tank, the player must occupy one of the sectors in Meduna, and start training militia immediately. As soon as the first 10 rookie militia are ready, enter the sector screen. If you see a tank. have one of the mercs enter it and - voila - you have you own armor.

The vehicle is actually quite useless - you can't use it in battle (except as a decoy - it attracts enemy fire by itself unlike the Hummer and the ice-cream truck). Your mercs may use it to travel between sector at a standard land vehicle speed of 2 sectors per hour. It also requires roads to move, though it doesn't run out of fuel.

In the v1.13 mod, the tank can be acquired within Meduna only if the Militia has brought one into the sector. The player can simply then assign a merc to enter one in the vehicles tab from the Map. One thing to note is that the player can only own two vehicles at any given time; if they already have the Ice-cream truck and Hummer, they will need to dismiss one of them before they can to get the tank.

The tank cannot be entered through the Tactical Screen due to the base game seeing the tank as a 'person'. Also due to this reason, if the player chooses to attack the tank (occupied or not), the tank will react the same way the Militia would if they were shot at - by shooting the player's merc with its cannon.

As a vehicle, it essentially function the same as the Hummer. You will need fuel for this vehicle and it takes half an hour to cross each sector. It can also be driven off-road and can traverse almost all of the land sectors in Arulco with only a few exceptions.

As a tool, it's use is limited. Although a tank shell and a FN Minimi can be found in its inventory, the player cannot fire the cannon. They can, however, take the machine gun and equip it to a merc. The tank can also be used as a decoy or bait as enemy troops will see it as a hostile target and will attempt to damage it but to no avail (due to its bulletproof nature).

Retrieved from "https://jaggedalliance.fandom.com/wiki/Jagged_Alliance_2_vehicles?oldid=16685"
Community content is available under CC-BY-SA unless otherwise noted.