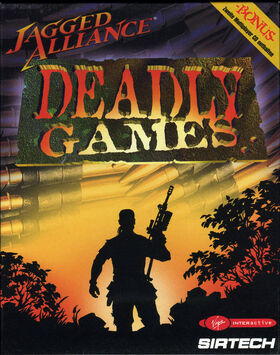 Jagged Alliance: Deadly Games is a tactical role-playing game developed by Sir-Tech and released in 1995 for DOS. It is a sequel or spin-off to Jagged Alliance and uses the same top-down perspective, graphics, and engine, along with adding several new features, characters and items. The game was also released as part of Megamedia's Megapak 8 bundle.

The commander is hired by the infamous soldier-of-fortune Gus Tarballs who calls the player 'Woody' or Woodrow' or even 'Woodman' to perform a series of jobs. The missions seem unrelated initially, but eventually uncover a plot by terrorist organization DFk to achieve military space superiority via a high tech satellite network.

Buying and Selling of Equipment