"Born to parents of Jamaican and Scottish ancestry, Dr. Raffitto Leevon has attempted to care for the casualties of war during countless conflicts. However, as of this moment, his standing within the medical profession remains sketchy." - Jagged Alliance

"Doctor Leevon, whose medical degree was always the subject of much debate, left this organization at the beginning of the year without notification. Apparently, he has changed his name and embarked on a new career. Doctor Raffiman, and his Cajun-funk band, Rotis and Haggis, has captured the imagination of the music world with the distinctive sound of their synthesized spoons and their current hit, Bajun Bayous." - Jagged Alliance 2 Alumni Gallery

While referred to as a doctor, there are lots of transparent clues that he obviously isn’t:

Raffi is another highly amusing, but generally useless merc. Most of his stats are awful, with only his Agility being any good. For a supposed doctor his Dexterity and Wisdom are awful, ensuring he’s terrible at both shooting and knifing. Needless to say his 4 medical skill doesn’t do him any favors either. Fun as a joke character, but useless otherwise. He is a fast runner with a lot of AP however, so he could be useful as an extra pair of hands to carry items since he costs essentially nothing. 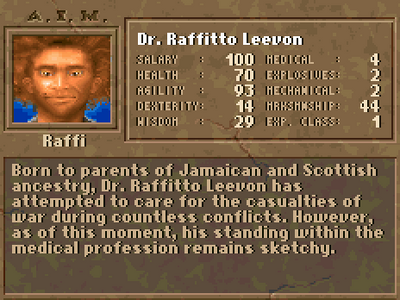 "When dat Doctor Koolhan dies, you try mes' again!" - Attempting to hire with Dr. Ahmad "Doc" Koolhan on the team

"What yous' be doing? Me just be gettin' ready! Dis no be right!" - Fired before entering a mission

"Me no like what yous' did to me's last time... Me's never goin' to work for yous'!" - Refusing hiring after being fired before entering a mission

"Me's tells you, no?" - Before repeating an interview

"Hello... Me sees something." - Item spotted

Dis person make fun of me lots of times man. Me do it. - Ordered to attack ally (Jagged Alliance?)

"Doc be no laughing at me no mores!" - Ordered to attack Doc

"Me gots to go! Me gets big medical award in homeland!" - If he is carrying $340 or more at the end of a mission

Retrieved from "https://jaggedalliance.fandom.com/wiki/Dr._Raffitto_%22Raffi%22_Leevon?oldid=16076"
Community content is available under CC-BY-SA unless otherwise noted.