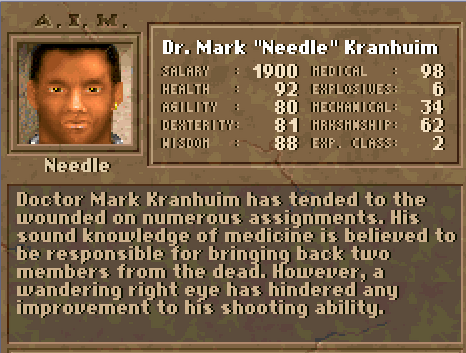 "Doctor Mark Kranhuim has tended to the wounded on numerous assignments. His sound knowledge of medicine is believed to be responsible for bringing back two members from the dead. However, a wandering right eye has hindered any improvement to his shooting ability." - Jagged Alliance

"After over a decade of valiant service, Needle failed his annual physical and was forced into early retirement. Regrettably, further deterioration of Dr. Mark Kranhium's wandering right eye had rendered him a danger to his squad. Presently he holds a part-time position with the New York City Coroner's office working the graveyard shift as a Coroner." - Jagged Alliance 2 Alumni Gallery

Retrieved from "https://jaggedalliance.fandom.com/wiki/Dr._Mark_%22Needle%22_Kranhium?oldid=16715"
Community content is available under CC-BY-SA unless otherwise noted.