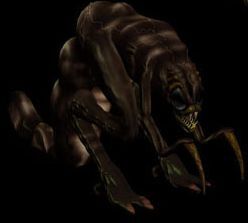 The creatures will emerge from one of the player's mines and attack mercenaries, soldiers and townspeople alike when the player reaches a certain point in the game.

The Crepitus (along with all related NPCs and events) will appear only if Sci-Fi Mode has been chosen at the start of the game.

The Crepitus were created by the Queen via unimaginable biological experiments, much like the ones that created the Bloodcats. The creatures live deep underground, in tunnels and caverns far below the mines, and are kept sated by a steady supply of human corpses taken mainly from the many dead resulting from the war and oppression occurring on the surface.

All information on the creatures comes from Gary "Gabby" Mulnick, an ex-member of the Queen's science team, and Gabby's friend, Ricardo "Rat" Grimaldo.  Father John Walker can be persuaded to reveal information that alludes to the presence of the creatures.

Developed as a biological terror weapon, the Queen has no compunctions on releasing these creatures on the people of Arulco when pressed, something that can be induced by commanding her army to stop feeding them.

There are two independent triggers for this quest:

After a head miner has notified that one of your mines has been infested (the mine can't produce if you don't kill the bugs), they are encountered in the infested mine and around it.

You will have some warning before this happens, in the form of a cut scene in which the Queen tells Elliot to stop feeding bodies to the bugs.

There are different, specialized stages of Crepitus.

Dull white in color. Moves very slowly and doesn't attack. Don't put that thing's blood in a jar, it's human blood and Gabby won't buy it.

Dull grey﻿ in colour. Spits acid. Will flee if the last one left alive.

Bright green in colour. Spits acid. Its blood can be sold.

Bright reddish-brown in colour. Rather fast (though not as fast as a Bloodcat). Uses claw attacks.

The Crepitus Queen is encountered on the lowest level of the infested mine. She spits cloud of acid and attacks with tentacles. Lie down to avoid the tentacles or hide behind the corner. Kill her using your preferred choice, discussed in Tactics paragraph below. Once she is gone, every bug left will instantly die. Once killed, she will leave several Queen Crepitus Jelly, but you can use glass jars on the queen's carcass to collect unlimited amounts of it until you leave the mine, as the corpse then will disappear.

The Crepitus are a biological weapon, result of genetical modification to undisclosed insects. Bred by Deidranna's scientists somewhere in Arulco, these mutants will be unleashed upon one of your mines (generally in Drassen) after you have achieved a certain progress in game. They are fast, tough and attack in groups, usually at night. They will not stop, until you destroy their Queen, found in the lair. There are different tactics to kill them, discussed below.

Warning, this paragraph contains a lot of spoilers! Proceed with caution.

Crepitus do not drop any weaponry or ammo and are significantly tougher, so remember to bring a lot of ammunition with you when fighting them. The Crepitus also take more damage if attacked from the rear. You can use this to your advantage if you find yourself in close combat with them.

Automatic weaponry with hollow point ammunition and explosives are ideal choices for dealing damage with your regular weapons.

Mustard gas is highly efficient against Crepitus, but due to the creatures' high agility, use of the handheld grenade is likely best left until contact with the Crepitus Queen or for use in tight corridors.

Crepitus are blind, but have an insanely developed sense of smell. Gabby's elixirs will temporarily mask scents when applied to your mercenaries, but be aware that this mask is compromised when a merc attacks with fists, throwing or by shooting. Explosives, their splash damage or gas agents do not count as direct attack (however directly hitting with the grenade itself - does). Additionally, all varieties (except larva) will emit a battle cry, causing all Crepitus in the sector to be put on alert.

Combining Madlab's Robot with a machine gun (HP ammo) and an operator masked with elixirs may allow you to neutralize the whole lair completely solo. Just remember to take enough ammo belts with you and enjoy the show.

It is also possible to defeat the whole lair with only one agile soldier with high level, by the means of stealth sabotaging. This strategy will work, since all bugs will immediately die once the Queen is dead. The required components are several (recommended more than 10) mustard gas grenades, one Gabby elixir and a light machine gun, loaded with AP (armor piercing) ammo. One should make his way all way down to the queen without alerting any guards. When confronting Queen, usually 4-6 adult Crepitus may block the path. Additionally they will run down to her once she is attacked. Even if this does not put hive on alert, it will impose significant danger as creatures will try to physically locate your merc. Although 2-3 mustard gas grenades are sufficient to kill the Queen, adult crepitus will line up physically blocking access - attacking them with any weapon will put hive on alert and they will run towards the shooter. When tossing the grenade however, they will repel from the cloud. Using combination of mustard gas (as shielding repellant) and LMG for elimination is also possible. AP ammo is recommended due to possibility to run out of gas grenades, and Queen is not susceptible to HP ammo.

Both indirect methods share the disadvantage - the lack of experience earned by your troops, due to the absence of direct fight. The advantages however are - a much faster progress and no injuries.

When fighting Crepitus in direct fashion, it is advisable to use a Gas Mask, which will provide some protection against the creatures' venomous green gas attacks. The gas acts similarly to mustard gas, except it is non-toxic to insects, and will rapidly drain stamina, causing bleeding and damage to your mercenaries' armor upon contact. As an option, you might want to use Night Vision Goggles, but keep in mind that UV Goggles are useless underground.

Bringing regeneration boosters will help your mercs recover from injury, as it is not possible to assign extended tasks (such as Doctor and Patient) underground. You can walk the injured soldier out of the lair, allowing the rest of the team to continue.  The lair must be cleaned overnight, or else the Crepitus will hide and reappear on the next night.

It is advisable to destroy the lair as soon as possible, as their attacks will occur every night, whether they are able to successfully invade or not, and possibly put heavy strain on any militia you have assigned to the affected town.

The Crepitus Queen's tentacle and spit attacks are quite powerful, so try to hide your attacking merc behind a wall in the end of every turn. A decent experience level is advised, so that no interrupts from the Queen would occur. Alternatively, you can disable the queen by using tear gas or mustard, so that she cannot interrupt your mercs.

Defending a town against Crepitus attacks generally result in a massacre of your Militia in Auto-Resolve mode - the Crepitus' mighty attacks and thick bodies combined with the inability to use auto or burst attacks in Auto-Resolve almost always give the creatures the upper hand. If a town is lost to the Crepitus, the creatures will eat or kill some of the city dwellers and the town's loyalty to your cause will suffer greatly.

To avoid this, keep one or two mercs in each sector of an affected town.  This allows you to avoid Auto-Combat, allowing your Militia to fight the creatures much more effectively, along with allowing you and your mercs to contribute to the battle.  The Crepitus have difficulty attacking you while you are on a rooftop - they can't climb, so there will be no melee, and their ranged attacks are quite inaccurate. Even an single unskilled merc with a gun and lots of ammunition could repel an attack with sufficient ammo. If there are no comfortable rooftops nearby, hiding behind fences and inside buildings will help a merc avoid melee attacks, though the spit attacks are still dangerous.

The Crepitus are an unusual and unexpected enemy when encountered in Arulco. Every merc in the game will react with unique dialogue, both to seeing one, killing one, being swarmed, exploring the lair and finally killing the Queen. Certain mercs with the "Fear of Insects" trait will react strongly and continually to their presence.

There are also two known survivors of the Crepitus, Bob and Gordon Jefferies. Both of whom show signs of severe psychological trauma when spoken to, with their dialogue alluding to them having encountered the bugs.

Retrieved from "https://jaggedalliance.fandom.com/wiki/Crepitus?oldid=16850"
Community content is available under CC-BY-SA unless otherwise noted.